The study Sexual Harassment of Women: Climate, Culture, and Consequences in Academic Sciences, Engineering, and Medicine, provides a review of decades of sexual harassment. 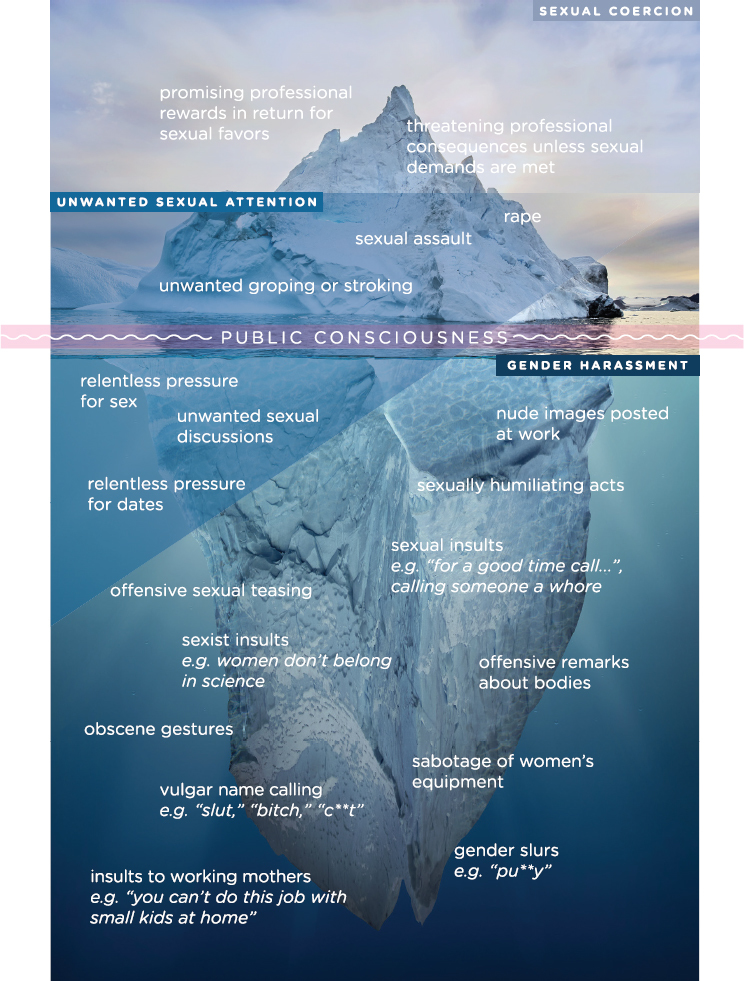 To learn more about harassment in academic sciences. Unwelcome sexual advances, requests for sexual favours, and other verbal or physical conduct of a sexual nature constitute sexual harassment when this conduct explicitly or implicitly affects an individual’s employment, unreasonably interferes with an individual’s work performance, or creates an intimidating, hostile, or offensive work environment. Sexual coercion entails sexual advances, and makes the conditions of employment (or education, for students) contingent upon sexual cooperation.

Unwanted sexual attention also entails sexual advances, but it does not add professional rewards or threats to force compliance. In this category are expressions of romantic or sexual interest that are unwelcome, non reciprocal, and offensive to the target; examples include unwanted touching, hugging, stroking, and persistent requests for dates or sexual behaviour despite discouragement, and can include assault (Cortina, Koss, and Cook 2018; Fitzgerald, Gelfand, and Drasgow 1995; Fitzgerald, Swan, and Magley 1997).

Gender harassment is by far the most common type of sexual harassment. It refers to ‘‘a broad range of verbal and non-verbal behaviours not aimed at sexual cooperation but that convey insulting, hostile, and degrading attitudes about” members of one gender (Fitzgerald, Gelfand, and Drasgow 1995, 430). Gender harassment is further defined as two types: sexist hostility and crude harassment. Examples of the sexist hostility form of gender harassment for women include demeaning jokes or comments about women, comments that women do not belong in leadership positions or are not smart enough to succeed in a scientific career, and sabotaging women. The crude harassment form of gender harassment is defined as the use of sexually crude terms that denigrate people based on their gender (e.g., using insults such as “slut” to refer to a female co-worker or “pussy” to refer to a male coworker; Fitzgerald, Gelfand, and Drasgow 1995).

Surprisingly gender harassment, including sexual harassment, are particularly common in academic medicine. “Time’s Up for Medicine? Only Time Will Tell”published in The New England Journal of Medicine describes the overlooked problem of sexual harassment within medicine sciences. “To highlight one statistic, as many as 50% of female medical students report experiencing sexual harassment. Imagine a medical-school dean addressing the incoming class with this demoralizing prediction: Look at the woman to your left and then at the woman to your right. On average, one of them will be sexually harassed during the next 4 years, before she has even begun her career as a physician.”

The article “Antarctica just has this hero factor…”: Gendered barriers to Australian Antarctic research and remote fieldwork presents findings from an exploratory online survey examining how 95 women experienced research and remote Antarctic fieldwork with the Australian Antarctic Program. Although women are entering polar science in greater numbers, a key theme of the qualitative findings of this survey is that gendered barriers to participation in research and fieldwork persist. The article focuses on five key gendered barriers including: 1) Physical barriers, 2) Caring responsibilities/unpaid work, 3) Cultural sexism/gender bias, 4) Lack of opportunities/recognition, and 5) Unwanted male attention/sexual harassment.